Fourth-year UA medical students Whitney Burns and Jeffrey Robertson, who met during their first week of medical school, were married on April 2. But on Friday, March 18, their excitement was all about Match Day. 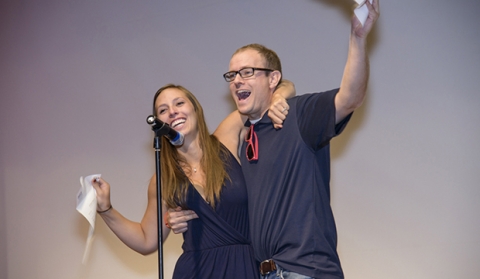 Whitney matched into one of two emergency medicine residency programs offered by the UA College of Medicine – Tucson, where Jeffrey will do his residency in anesthesiology.

“We are so happy. This is our first choice. This is where we want to be,” Whitney said. “We have our roots here, and we have our friends and family here, and we love the faculty here. We are just so happy.”

Charity Adusei, a native of Ghana, West Africa, emigrated to Arizona with her family when she was 17. She is the first person in her immediate family to get a college degree, and the first in her extended family to become a doctor. She recently returned to Ghana to spend six weeks researching barriers and motivators that hinder or promote post-natal follow-up care for newborns – her “capstone” project in global health. She will graduate with a dual MD-MPH degree.

Charity hoped to stay in Arizona, and was ecstatic to match into the pediatrics residency at Phoenix Children’s Hospital.

With pediatrics, Charity said, “I get the unique opportunity to positively impact future generations. That is quite an honor. I also get to take care of adorable babies and children, and have great longitudinal follow-up. Children are resilient and those little fighters remind me every day to give my best in everything I do.

She will graduate in May with a dual MD-MPH degree, and hopes to continue research and advocacy in global health. “While growing up in Ghana, I didn’t realize how bad things were over there; I accepted them as the status quo,” she said. “Now I have the perspective from both developed and developing worlds, so I don’t have the excuse to sit back and do nothing.”

Tim Tiutan graduated from the UA in 2012 with two bachelor’s degrees, in physiology and Spanish linguistics.  Born in the Phillipines, he came to the U.S. with his family when he was 8. On Match Day he learned he will do his internal medicine at Cornell. His goal is to specialize in hematology and oncology.

During med school, Tim did research in several UA labs, including with the UA Cancer Center, and in 2013 had a summer research fellowship at Johns Hopkins, called CUPID - Cancer In Under-Privileged Indigent or Disadvantaged, where he did breast cancer research. He is co-author or first author on nine pending or published articles, and has presented posters at multiple national conferences.

Throughout his four years of medical school he volunteered with the Commitment to Underserved People (CUP) program’s Shubitz Family Clinic.

"I want to focus mainly on my clinical practice, but also have the opportunity to teach and perform clinical research as it relates to cancer health disparities. I want to ultimately address the added needs of the Hispanic and LGBT communities."

Whitney and Jeff applied to 60 residency programs, all in big cities in the western U.S., near where their friends and family live and where they thought they had the best chance of matching as a couple. Jeff, who grew up in Boulder, Colo., graduated from the UA in 2009 with a degree in physiology and a minor in chemistry. He took part in the Rural Health Professions Program, with rotations in Tuba City and Payson, Arizona.

“I knew I wanted to go to medical school eventually,” he said, “but after graduating I worked in a chemistry lab here at the UA for three years, while also working for two of those years as a scribe for an ER doc in Tucson.”

Jeff chose anesthesiology, he said, because “I like doing the hands-on kind of stuff. I like being in the OR, kind of being my own boss, and taking care of one patient at a time. I find it fascinating.”

Whitney, from Phoenix, graduated from the UA in 2012, with a double major in physiology and psychology. During medical school she completed the CUP distinction track and participated in global health by spending a summer in Haiti. She chose emergency medicine, she said, because “you get to take care of kids and adults, and I really like the variety.”

Looking back on her med school experience, Whitney said, “It’s been a great four years. A really fast four years.”

“This is one of the most successful matches we’ve had,” said Kevin Moynahan, MD, deputy dean for education at the college and a 1993 graduate of the College of Medicine – Tucson. “It’s really great to see the students’ four years of hard work finally realized, and for them to be able to say ‘I’ve done it.’ Even though graduation may be the ultimate ceremony, this day means the most to the students. They know where they’re going. They’ve been accepted into the profession.”

Violet Siwik, MD, the college’s interim associate dean for student affairs and a 1991 graduate of the College of Medicine, commented, “These students make us proud because of all their community involvement, and their humanism, which they’ve demonstrated every year. And I’m very excited for them.”