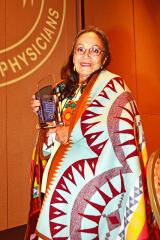 Victoria Stevens, MD, has had a fulfilling, award-winning career since graduating from the College of Medicine – Tucson in 1976.

Dr. Stevens won the 2018 Physician of the Year Award from Association of American Indian Physicians in July. She is currently the vice chair for the San Carlos Apache Healthcare board of directors.

Before retiring from private practice, Dr. Stevens served as an orthopedic surgeon. She now guides the delivery of patient care at P.L. 638 Hospital, which was founded by her tribe, the San Carlos Apache.

She grew up in central Arizona and lived in Tucson briefly while in school. Her mentor in medical school told her it wasn’t possible to provide specialty care in rural Arizona, but she proved them wrong.

Dr. Stevens has mentored students, testified at the Arizona State Legislature, given time to hospital medical staff, and improved the lives of people in and outside of her reservation.

A mother of two sons, Dr. Stevens was also recognized in "Changing the Face of Medicine," a National Library of Medicine exhibit.