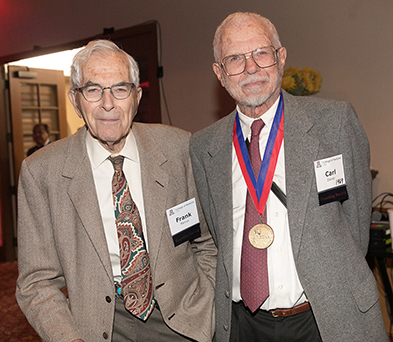 On Monday, Feb. 10, the University of Arizona College of Medicine – Tucson hosted the 2020 Endowed Academic Scholarships Dinner to celebrate founding faculty members, as well as donors who have supported endowed scholarships for medical students.

“This dinner is a celebration of not only our past, but our future,” Dean Michael Abecassis, MD, MBA, said at the event. “As we move forward, we will continue to recognize our founders, but also recognize the future of academic medicine and our need for scholarship support and the impact this support have on the college.”

In 2019 alone, 80 endowed scholarships paid out a million dollars in support to College of Medicine – Tucson medical students. Current scholarship recipients attended the event and had the opportunity to mingle with founding faculty and express gratitude toward their donors.

“I don’t think I can adequately express my appreciation for what you’ve given me,” fourth-year medical student Patrick Gallaway told audience members. “I was fairly set on [pursuing] anesthesiology up until my third year.”

But Gallaway had a change of heart after realizing he would have fewer student loans to repay. “It had a big impact on me and I decided to pursue something I am passionate about: pediatrics.”

Pediatrics is one of the lowest paying physician specialties, but Gallaway feels confident pursuing the career now that he will be less burdened by debt after graduating.

“Medical school is not cheap, it’s very expensive,” Shirtold audience members. “If you don’t have the means to pay tuition upfront, you’re often left [to take out a loan.] By the time you graduate, you have a lot of interest accrued and it’s a nightmare. That’s why your contributions mean so much to us.”

Shir said his scholarship has helped him pay for essentials during medical school, including housing and food.

In addition to easing their financial burden, medical students expressed that the scholarships have given them an extra sense of support and encouragement.

Gallaway said, “During my lowest points in medical school, I would often remember that you believed in me enough to give me a scholarship. It wasn’t just money that you gave me — it was confidence.”

Click here to see a full photo album from the event.