Justin S. Cetas, MD, PhD, has been named the new chair of the Department of Neurosurgery at the University of Arizona College of Medicine – Tucson, effective July 1.

Dr. Cetas currently serves as chief of neurosurgery at the VA Portland Health Care System and as associate professor, residency program director and vice-chair for education in the Department of Neurological Surgery at the Oregon Health and Science University in Portland, Oregon. At the UArizona College of Medicine – Tucson, he will lead a neurosurgery faculty base of 10 current medical providers, nine college affiliates and several community partners. Upgraded from a division in the Department of Surgery in July 2019, neurosurgery is one of the college’s newest departments.

“Dr. Cetas is a surgeon-scientist whose academic, clinical and investigative endeavors match those that support the College of Medicine – Tucson’s tripartite mission,” said Dean Michael A.I. Abecassis, MD, MBA. “This includes nurturing and mentoring the next generation of educators, researchers and clinicians serving the Tucson community, and advancing the field and science of neurosurgery by discovering and translating new discoveries to improve the lives of patients suffering from neurological diseases in Arizona and beyond.” 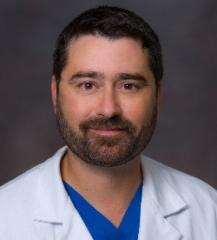 Dr. Cetas began his undergraduate studies at St. John’s College in Santa Fe, New Mexico. He earned his medical degree (2002) and a doctorate in neuroscience (2000) at the University of Arizona, followed by an internship in general surgery (2003) and residency in neurological surgery (2009) at the Oregon Health and Science University. He also completed a fellowship (2010) in skull base and cerebrovascular neurosurgery there, after which he joined the faculty as an assistant professor. He was promoted to associate professor in 2016 and has served as the department’s residency program director since 2017 and vice chair for education since 2019. He also has served as a member of the Oregon Trauma Audit Group since 2014 and on the research committee for the VA since 2017 and the Portland VA Medical Center since 2018.

Dr. Cetas began receiving U.S. Department of Veterans Affairs funding in 2013. His research focuses on understanding the effects of subarachnoid hemorrhage – a life-threatening type of stroke caused by bleeding into the space surrounding the brain – on the brainstem and central nervous system and their subsequent role in determining long-term outcomes.

One of his research goals is to identify a novel biomarker for predicting a patient's risk for developing delayed vasospasm, or narrowing of the arteries caused by persistent contraction of the blood vessels, and subsequent neurological deficits, as well as a new potential therapeutic target for prevention of delayed vasospasm. He also is interested in novel imaging techniques of pituitary and skull base tumors.

Dr. Cetas has authored or co-authored nearly 50 peer-reviewed papers, 10 book chapters and multiple abstracts related to his research. He has served in editorial and ad hoc review roles for the following journals: Acta Neurochirurgica, Translational Stroke Research, Frontiers in Neuroscience, Neurocritical Care, Neurological Research, PLoS One, Journal of Cerebral Blood Flow and Metabolism, World Neurosurgery, Cell Death and Disease, and F-1000Prime. And he has spoken as an invited lecturer at more than a dozen conferences and national and international events.

His education duties have included mentoring summer interns, visiting students and volunteer students for summer and year-round research rotations. He has served as a student clinical preceptor. He has taught on topics such as skull base anatomy, traumatic brain injury and behavioral neuroscience pain surgery, and he has mentored numerous residents, fellows and junior faculty members.