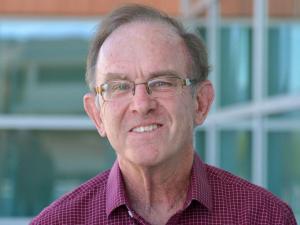 Dr. Keith Joiner, MD MPH, has accepted the position of Director for Scholarly Project Program.  This program, which will be mandatory for College of Medicine – Tucson medical students starting with the Class of 2025, is designed to allow each student to pursue a customized hypothesis-driven question as they complete their medical school curriculum.  In his role as Director, Dr. Joiner will be recruiting assistant directors and mentors for the students over the next several months.

Dr. Joiner is Professor of Medicine, Economics, Cellular and Molecular Medicine and Public Health at the University of Arizona. From 2004 until 2008, he was Dean of the College of Medicine - Tucson, and Vice-Provost for Medical Affairs. In 2009, he was Senior Scholar at the Association of Academic Health Centers, Washington, DC. In 2010, he moved to the Eller College of Management to create and direct the Center for Management Innovations in Healthcare, and to teach and conduct research in health economics.

Before moving to the University of Arizona, Dr. Joiner was Chief of the Section of Infectious Diseases and the Waldemar von Zedtwitz Professor of Medicine, Cell Biology and Epidemiology at the Yale University School of Medicine. Prior to that he was Head of the Unit of Microbial Pathogenesis at the National Institutes of Health, Bethesda, MD.

Dr. Joiner’s research spans the gamut from basic cell biology, to resource allocation in academic health centers, to healthcare payment and delivery reform. He was in the top 5% of all NIH grant recipients in the period from 1980-2005. At Yale University, he created and directed the Investigative Medicine Program, a PhD program for MDs with at least two years of residency experience, that formed the basis for the Yale Clinical and Translational Science Award.

Please join us in welcoming Dr. Joiner into this new role.  We are excited for the program to begin.