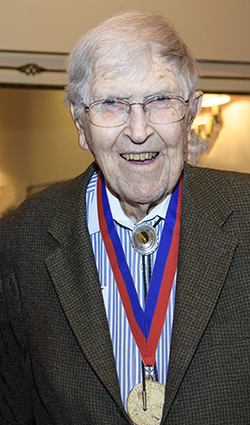 Paul C. Johnson, PhD, passed away at the age of 93 on February 21, 2021. A Founding Faculty member in the University of Arizona College of Medicine, Dr. Johnson was Professor Emeritus and former Head of the Department of Physiology at COM-T.

Dr. Johnson was trained in Physics and Physiology at the University of Michigan, and received his PhD there in 1955. From 1956 to 1967, he was on the faculty of Indiana University. He was recruited to the University of Arizona in 1967 as Professor and Head of the Department of Physiology in the newly established College of Medicine. Merlin K. Duval, the founding dean of the College, charged Dr. Johnson with creating a Department of Physiology and recruiting a world-class faculty.

Dr. Johnson recruited faculty members with a broad range of interests and an established tradition of excellence in research and teaching that continues to this day. Among the earliest to join were Drs. Douglas Stuart (neurophysiology), William Dantzler (comparative renal physiology), Raphael Gruener (neuromuscular physiology), Robert Gore (microcirculation) and Eldon Braun (comparative physiology).

Dr. Johnson’s own research topic area was the physiology of microcirculation and the mechanisms that regulate of blood flow in small vessels. The Arizona microcirculation group thrived and Tucson became home to many leading figures in this research area. Dr. Johnson led the Department of Physiology for 20 years, stepping down as Head in 1987. In 1994, he retired from the University of Arizona and moved to San Diego, where he joined colleagues at UCSD and continued his research activities.

The contributions that Dr. Johnson made to his profession were recognized by many awards and honors, including the Microcirculatory Society Eugene M. Landis Award , the American Physiological Society Carl Wiggers Award and an honorary Doctor of Medicine degree from the University of Limburg in the Netherlands.

Dr. Johnson is survived by a daughter, Ciri, and two sons, Philip and Christopher, and a grandson. His wife Genevieve (Genny) passed away in 2017.

Details regarding memorial services have not yet been announced.