MedCat Austen Thompson, Class of 2022, to Be Inducted Into the University of Arizona Sports Hall of Fame 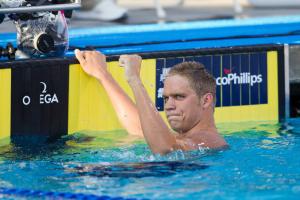 On Thursday, September 8, Austen Lowell Thompson, MD, PhD, will be inducted into the University of Arizona Sports Hall of Fame, honoring his outstanding swimming career for the Wildcats. He will travel to Tucson from Rochester, Minn., where he is currently an orthopedic surgery resident at the renowned Mayo Clinic.

Dr. Thompson’s athletic career as a Wildcat may have ended in 2012 when he won the National Collegiate Athletics Association championship in the 400-meter individual medley, but that final victory of his senior year was by no means the end of his accomplishments at UArizona. He graduated with two bachelor’s degrees and then went on to earn a master’s degree in physiological studies before completing a PhD in medical pharmacology and medical degree at the College of Medicine – Tucson.

As a student-athlete at UArizona, Dr. Thompson developed and improved many life skills he uses as a physician. “A lot of the life lessons I’ve learned in athletics translated over to medicine — hard work, effort, teamwork, confidence,” he said 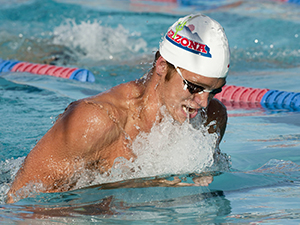 The confidence Dr. Thompson built as a championship swimmer is one of the keys to his success so far in medicine. That confidence didn’t come overnight; it was produced by a consistent effort toward self-improvement.

“Confidence comes from doing things day in and day out the right way, and training yourself to become the best you can be, which I think is something that’s very applicable in medicine,” Dr. Thompson said. “If you want to do well in medicine, it needs to be a lifelong passion of yours. Learning doesn’t stop when you graduate from medical school, it’s a daily thing. You’re always learning and there are always ways to improve.”

As a swimmer, Dr. Thompson followed the mindset of always improving. From the start of his freshman season to the day he won the national championship, Dr. Thompson shaved more than 14 seconds off his 400-meter individual medley time. The title-winning time of 3:39.15 is still second in UArizona history, and over the course of his career, he earned a total of seven All-America honors as a swimmer by finishing in the top 16 in his events at the NCAA National Championships.

But even as he excelled in the pool, Dr. Thompson did not neglect his studies.  He pursued – and ultimately earned – bachelor’s degrees in physiology and molecular and cellular biology. As a senior, he was named an Academic All-American by the College Sports Information Directors of America, which selects student-athletes who are important members of their team and maintain at least a 3.5 GPA. 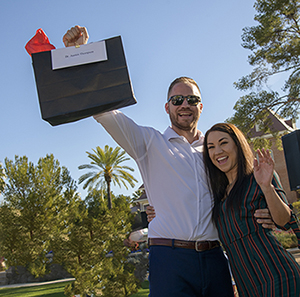 His undergraduate studies were demanding, but also gave Dr. Thompson tools that gave him better insight into his own athletic training and performance.

“Learning the inner workings of the human body gave me a deeper understanding of what I was doing in and out of the pool in terms of how my body was adapting to different stimuli and fatiguing at certain rates,” he said.

Understanding the connection between his athletic performance and the subjects he was studying was one way Dr. Thompson was able to balance his priorities while in school.

“It’s nice to blend two passions together — getting to see how the science affects athletics, which was obviously my huge passion in school,” he said.

Just as physiology and swimming were a natural fit for Dr. Thompson as an undergraduate, orthopedic surgery was a logical choice for the former athlete.

“Orthopedics really came about for a lot of reasons,” Dr. Thompson said. “One of the main reasons was you can get inundated with orthopedic injuries in athletics. Luckily, I was never on the receiving end of that, but I did, unfortunately, have teammates who had to go through it.”

As he rotated through orthopedics as a medical student, Dr. Thompson encountered the familiar feeling of comradery in his new environment.

“Not only was there a team aspect between the doctor and patient, but between the physician and the nurses, physicians to each other, OR staff, ancillary staff, everyone was just in it,” Dr. Thompson said. “Coming from an athletic background, that was really nice to see.” 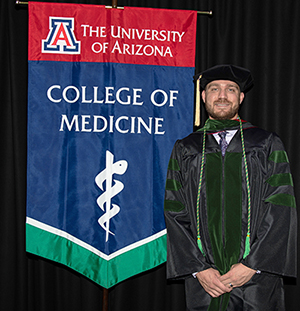 The collaborative spirit of both medicine and sports is important to Dr. Thompson. During his senior season, his teammates elected him captain, a moment in his athletic career that stands out to him.

He says being able to collaborate well with other people is also an essential skill in medicine. “Medicine is very much a team sport, and you need to work with a lot of people. Same with athletics,” Dr. Thompson said. “You need to be around different people with different personalities and different ways of managing things, and interact in a meaningful and engaging way while still being able to get work done together.”

In total, during his time at the University of Arizona, Dr. Thompson earned five degrees, seven All-America titles, one Academic All-America honor and an individual NCAA title. Now, as he is inducted into the UArizona Sports Hall of Fame, he can look back at all he accomplished as a Wildcat during his time as a student and an athlete.

“I’m honored by the opportunity that the College of Medicine – Tucson gave me to realize all my goals after I was done with athletics,” Dr. Thompson said. “I’m at my dream institution, and I’m getting to train with some of the best surgeons and physicians in the world. I want to thank the University of Arizona for everything they’ve provided for me, and I hope to give back to them someday.”