University of Arizona Health Sciences researchers suggest stroke recovery might be improved by a drug that could help immune cells process the cholesterol-rich debris generated by a stroke.

Researchers at the University of Arizona College of Medicine – Tucson and the UArizona R. Ken Coit College of Pharmacy have discovered a potential treatment to reduce the risk of post-stroke dementia, which may be influenced by the immune response to dead brain tissue left in the wake of a stroke. The Journal of Neuroscience recently published the findings.

Ischemic strokes occur when blood vessels to the brain are blocked or restricted, cutting off the brain’s supply of oxygen and nutrients, and killing brain cells. The resulting patch of dead tissue sets off an inflammatory response that can last for months as the immune system struggles to processes the cholesterol-rich debris that is primarily composed of myelin, a fatty substance that forms an insulating sheath around neurons. Inflammation is a normal part of the immune response in which immune cells rush to the site of injury, but it can damage tissue if it lasts too long. 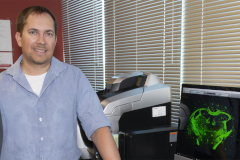 “Up to one-third of people who have a stroke develop dementia in the months afterward. We don’t know what causes that,” said Kristian Doyle, PhD, associate professor of immunobiology and neurology at the College of Medicine – Tucson. “We’re testing the hypothesis that dementia could be caused by a lingering, smoldering inflammatory response at the site of the stroke, causing further damage to neighboring brain regions.”

Most stroke research focuses on the first few hours, when the brain is deprived of its blood supply and cells start dying. In contrast, Dr. Doyle focuses on the weeks and months after a stroke, leading him into largely uncharted territory. Recovery from stroke is not well studied and little is known about how dementia develops in its wake. For some, it might be triggered by subsequent strokes or other conditions like Alzheimer’s disease. But in others, Dr. Doyle suspects dementia arises when the immune system is overwhelmed by the fatty mess created by dead brain tissue.

“Most clinical trials have focused on saving the brain while having a stroke, as opposed to targeting chronic inflammation after a stroke,” Dr. Doyle said. “A promising target for enhancing recovery is to quench the inflammatory response sooner.”

The Doyle Lab previously discovered that, after a stroke, the inflammatory response to the dead brain tissue spreads into healthy areas of the brain, killing more brain cells.

“Immune cells rush in to clean up and make repairs, but they get overwhelmed, drawing in other immune cells that make toxic substances to process the dead tissue. Unfortunately, these substances also damage areas that weren’t hurt by the initial stroke,” said Dr. Doyle.

Dr. Doyle’s team is investigating 2-hydroxypropyl-β-cyclodextrin, or cyclodextrin, a molecule they hope will help the immune system clear the cholesterol-rich stroke debris with less collateral damage. They are exploring whether the inflammatory response is exacerbated by cholesterol, which is rapidly dumped into the brain as dead cells break down. Immune cells take in this cholesterol at such high concentrations that crystals form inside them, causing further damage and sounding the alarm for more immune cells to respond.

“Your brain is 2% of your body weight, but contains 20% of your body’s cholesterol. After a stroke, immune cells gorge themselves on cholesterol and intracellular crystals form. The crystals are sharp, so it’s like eating glass — they burst open the cell,” Dr. Doyle said. 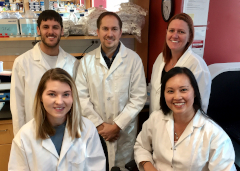 Thanks to cyclodextrin’s chemical properties and barrel shape, cholesterol can be safely stored within the “barrel” without provoking a heightened inflammatory response. Dr. Doyle’s team found that treatment with cyclodextrin resulted in less cholesterol accumulation and inflammation in the brain in animal models. Cyclodextrin also reduced neurodegeneration, protected memory function and reduced impulsivity, a personality change that can occur after stroke.

“We’re sending reinforcements so the immune system doesn’t have to process all the cholesterol by itself,” Dr. Doyle said. “Cyclodextrin helps remove cholesterol, dampen inflammation and improve recovery. We’ve provided proof of the concept that if you can target overwhelmed cholesterol processing in immune cells after stroke, you can improve recovery.”

Dr. Doyle hopes this proof of concept will spur further investigation into targeting chronic inflammation in the weeks and months following stroke, opening up previously unrecognized and more accessible avenues for developing drugs that improve stroke recovery and reduce risk for post-stroke dementia.

Cyclodextrin is currently FDA approved as an ingredient in other drugs, though it is not used as a standalone treatment. Instead, Dr. Doyle says it’s used as a “vehicle” to deliver drugs to hard-to-reach places, transporting active ingredients in its protective, barrel-shaped container.