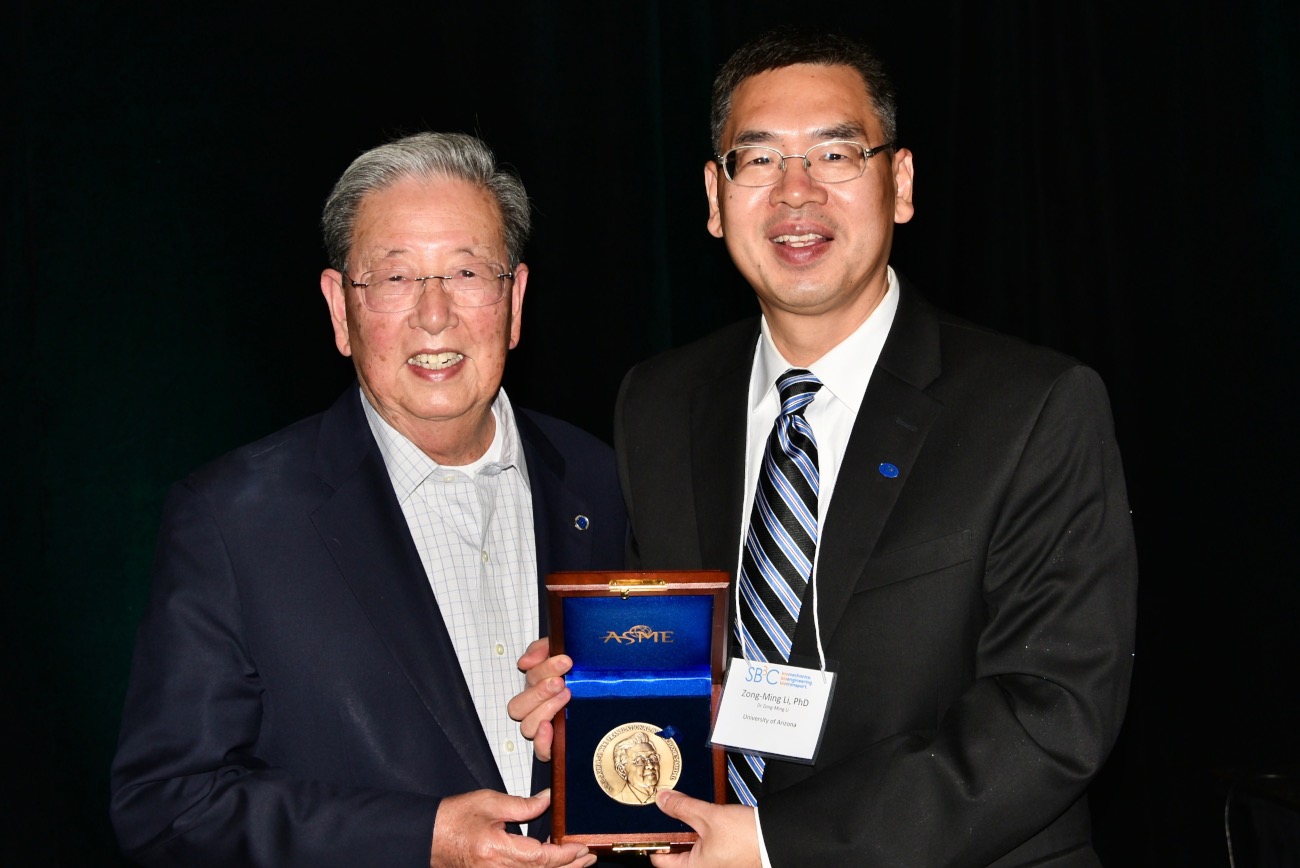 Dr. Zong-Ming Li (right) was presented with a national award named after his former mentor, Savio L-Y. Woo (left), who Dr. Li describes as “a giant in orthopedic sports medicine and bioengineering.” 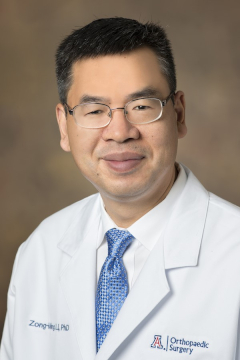 Zong-Ming Li, PhD, University of Arizona College of Medicine – Tucson professor of orthopaedic surgery and director of the Hand Research Laboratory, has been selected by the American Society of Mechanical Engineers to receive the 2022 Savio L-Y. Woo Translational Biomechanics Medal, which is awarded to an individual who has taken bioengineering science from fundamental lab discoveries toward clinical applications for patients.

“I’m humbled to receive this award and honored that the committee selected the lab to recognize our contribution to carpal tunnel work,” said Dr. Li, who also is a professor of biomedical engineering at the UArizona College of Engineering. “The Hand Research Laboratory’s mission is to understand how the normal hand works and how to fix the hand when its function is disturbed. As an engineer, it is so interesting to study the human body — in our case, the complexity of the hand and wrist.”

Dr. Li looks at the hand and wrist through an engineer’s lens to figure out how they work. As he unraveled more and more of their mysteries, he began developing engineering solutions to problems such as carpal tunnel syndrome, a condition that affects approximately 3% of the general population and is characterized by tingling, numbness or weakness in the affected hand.

The carpal tunnel is a space in the wrist through which the median nerve travels from the arm into the hand, passing under the transverse carpal ligament. If the ligament pushes against it, the nerve can become irritated, which may result in carpal tunnel syndrome.

The condition may be initially treated with physical therapy, wrist splints or corticosteroid injections. If those strategies fail, doctors may recommend carpal tunnel release surgery to relieve the ligament’s pressure on the nerve. Possible complications of surgery include a weakened grip, and in some patients, carpal tunnel syndrome can return.

“In the U.S., a half-million people are getting surgery each year, but it is not a perfect solution,” Dr. Li said. “We asked, ‘Can we relieve the median nerve without surgery?’ That simple question has kept us busy for years.”

Dr. Li and his research team, along with colleagues at the Cleveland Clinic, have developed a device that intermittently compresses the ligament and causes it to bend in a way that reduces pressure on the adjacent nerve. In early trials, the wrist manipulation improved symptoms in participants.

“We apply force from the sides, and you see this dramatic arch formation. By causing the ligament to arch in this way, we can relieve pressure on the nerve and avoid surgery,” Dr. Li said. “It’s the same principle as squeezing a business card between your fingers and causing it to arch upward.”

Dr. Li said discovering how to manipulate the space in the carpal tunnel to make more room for the nerve is one of his proudest accomplishments because it has potential to help countless patients.

“To find this simple principle that nobody else in the field is thinking of — that’s exciting,” he said. “We want not only to understand clinical problems, but also find solutions. Bringing this translational work to fruition takes years of work.”

The device has completed early clinical trials, and Dr. Li and his collaborators are seeking grants to advance to the next phase of investigation, where they hope to enroll patients at multiple sites across the country to test the effectiveness of the device on a larger scale and determine the optimal strategy for its use.

For Dr. Li, receiving an award named after Savio L-Y. Woo is especially meaningful, as earlier in his career Dr. Li spent time in Dr. Woo’s Musculoskeletal Research Center at the University of Pittsburgh.

“Dr. Woo is a giant in orthopedic sports medicine and bioengineering. I learned from him to focus on a clinical problem, run a lab, serve the profession and mentor future generations,” Dr. Li recalled. “Even after I moved to another institution, our relationship continued. I could call him often, and he kept mentoring. He’s truly inspiring.”

As a biomechanical engineering graduate student in China, Dr. Li worked in a hospital where national athletes received rehabilitation for injuries. The experience motivated him to pursue sports biomechanics in the United States, where he earned his doctorate in biomechanics at Penn State University under the mentorship of Vladimir Zatsiorsky, a prominent sports biomechanics figure who shifted his focus to the hand. It didn’t take long for Dr. Li to share this fascination.

“The hand is such an intricate object — the dexterity, the coordination of multiple muscles, the control of individual digits — it’s fascinating,” Dr. Li said, sharing what has driven him to devote his career to understanding the human hand. “Our hand is a hallmark of being human. We close our eyes and the thumb and index finger coordinate as if they have eyes and watch each other — most other animals aren’t able to do that.”

The medal will be formally presented at the Summer Biomechanics, Bioengineering, and Biotransport Conference in June 2022, where Dr. Li will deliver a presentation on his work.

Dr. Li also serves as the vice chair for research in the Department of Orthopaedic Surgery and the associate director of the UArizona Arthritis Center, holds the William and Sylvia Rubin Endowed Chair in Orthopaedic Research, and is a member of the BIO5 Institute.