Justin Schultz Cetas, MD, PhD, chair of Department of Neurosurgery at the University of Arizona College of Medicine – Tucson, was born on October 3, 1970, in Ames, Iowa. He died on July 13, 2022, in Tucson, Arizona, from a fatal collision on his motorcycle, at the age of 51. He died instantly. 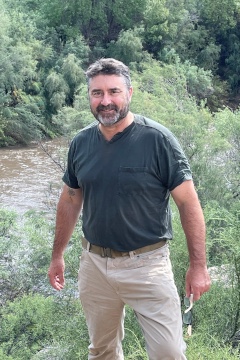 Justin had an immense soul. He was husband to Alivia; father to Isabelle, Elijah, Joaquin and Lucia; brother to Amanda and Melissa; son to Tom and Betty; uncle to Jeremiah, Adriana, Nathaniel, Shayla and Jade; and soon-to-be grandfather. He was a loyal friend, a respected colleague and a beloved mentor. He was many things, and those he leaves behind remember him as a complicated man. Justin was intimately woven into the fabric of all four of his children’s lives, and others who he knew briefly. He was a surgeon, a scientist, a teacher, a fisherman, a sailor, a rock climber, a mandolin player, a beekeeper, a voracious reader and a knitter. He was a philosopher and a wanderer, a Renaissance man and a romantic. Justin rebelled against all labels, and strove every day to live the good life — a life of simple freedom and self-possession shared with those he loved. He brought joy, wisdom, strength and compassion to all who knew him. He is dearly missed.

Justin grew up in Tucson, roaming the Sonoran Desert with his best friends Javier, Jaime, Steve and Tim. As a young man he attended St. John’s College in Santa Fe, New Mexico, where he studied under the Great Books Program. He was at home and himself in the Socratic dialogue of St. John’s classrooms, where he developed the core values he carried through life. He took no idea for granted. He challenged everyone — loved ones, colleagues, supervisors — with deep and meaningful questions. He loved stories, and laughed often.

Justin began his medical studies at the University of Arizona College of Medicine – Tucson, where he pursued a joint MD and PhD in neuroscience. He graduated at the top of his class, and moved to Portland, Oregon, with his two young children, Isabelle and Elijah, to begin residency in neurosurgery at Oregon Health and Sciences University.

Justin worked at OHSU for nearly 20 years, from internship through neurosurgery residency and skull base fellowship, to becoming a highly skilled surgeon-scientist. As associate professor and program director, he published more than 50 peer-reviewed papers, and mentored hundreds of neurosurgery residents. He also performed hundreds of cases a year at the Veterans Administration Hospital, and helped it grow as a regional hub for neurosurgery. Justin’s colleagues remember him as a larger-than-life mentor and a close friend. They remember his fire, his wisdom, his love of life, his tweed jackets and cowboy boots, his many games of Candy Crush, and his great capacity to see the better side of another’s weakness. Justin pushed people and institutions to reach their full potential, even when he sometimes underestimated his own. He recognized the fragility of life, and aimed to live fearlessly.

In 2021, Justin returned home to Tucson with his wife Alivia and youngest children Joaquin and Lucia to serve as the chair of the Department of Neurosurgery at the College of Medicine – Tucson, his alma mater. He accomplished many great things in one year, and spent many beautiful days with his family and childhood friends. Those who knew Justin believe it was one of the happiest years of his life. In his own words, he had accomplished everything he had set out to do, and more. Justin’s death leaves an enormous gap in all our lives.

Services for Justin Schultz Cetas will be held in the fall, on a date to be determined. On Sunday, November 6, the family will march in the All Souls Procession in Tucson. We invite the community to walk with us.

In lieu of flowers, donations can be made in Justin’s name to the independent journalists of High Country News.

The above obituary was shared by the Cetas family.