Staring Straight into an Overlooked Virus 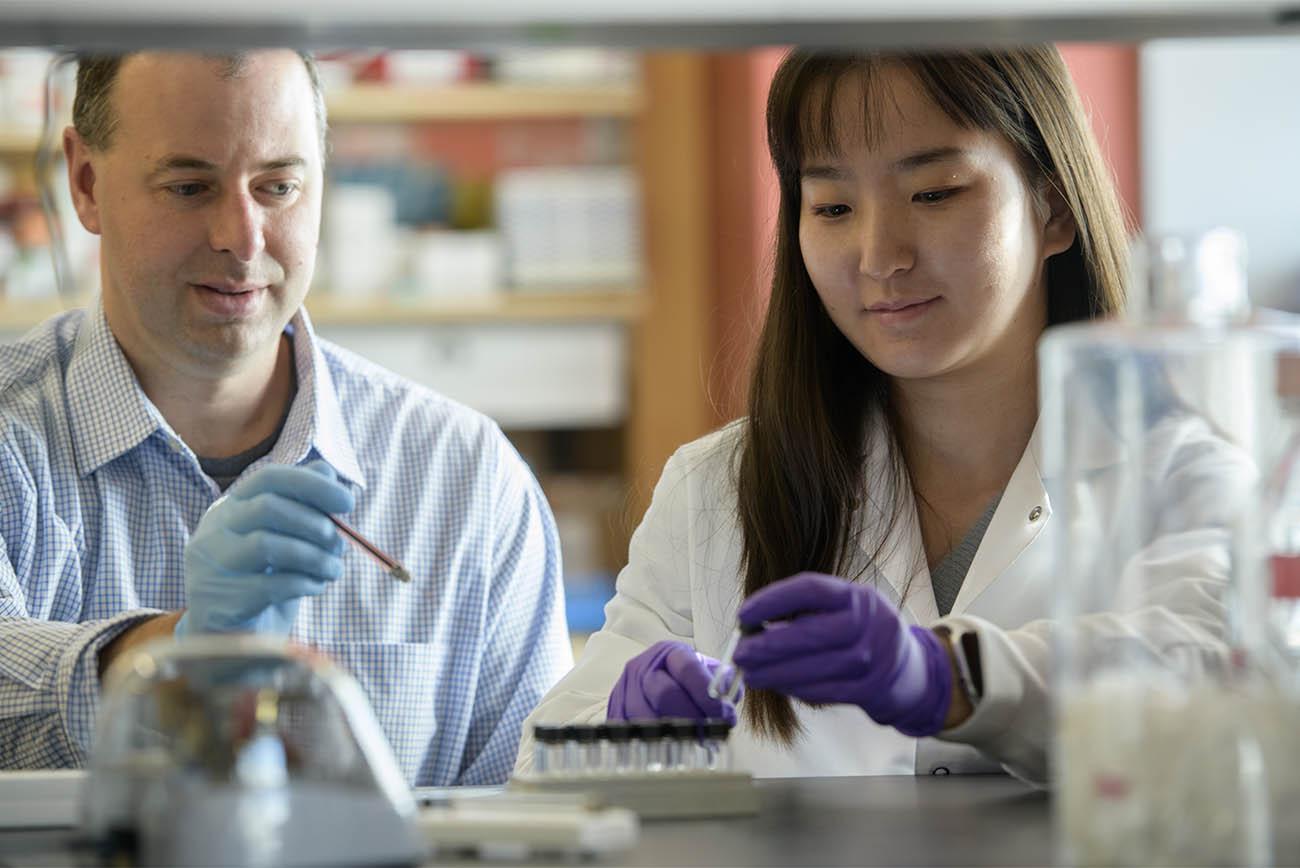 John G. Purdy, PhD (left), associate professor of immunobiology, with Yuecheng Xi, PhD, then a postdoctoral researcher with the Purdy Lab, which investigates the inner workings of a common virus.

John Purdy, PhD, peers into the private lives of viruses, watching them hijack our cellular machinery to pump out the previously undiscovered raw materials necessary for their replication.

The virus peering back at him from the other side of the microscope is cytomegalovirus, or CMV. Although it’s not a well-known virus, more than half of U.S. adults are infected with CMV by the time they reach 40.

“Even though most of us are infected, we potentially live our whole life with this virus and never know it,” said Dr. Purdy, an associate professor of immunobiology. “But every once in a while, it reactivates from a dormant state. If the immune system fails to keep the virus in check, it goes haywire and can replicate in great quantities, and can cause disease or even death.”

Most infections are asymptomatic, though some healthy people may experience flu-like symptoms. But in immunocompromised individuals, a CMV infection might become a serious concern, potentially affecting multiple organ systems. Additionally, as one of the few pathogens that can cross the placenta, CMV poses a threat during pregnancy, increasing risk of birth defects such as hearing loss or microcephaly. 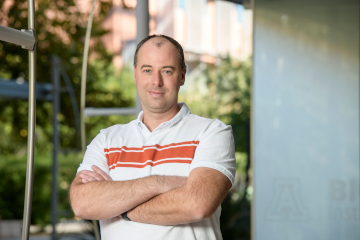 When Dr. Purdy came to the University of Arizona College of Medicine – Tucson in 2015, he joined a team of scientists specializing in the ways microbes interact with the beings they infect.

“My department is really good at understanding specific host-microbe interactions. Each of us have bad bugs that we like to look at,” said Janko Nikolich-Žugich, MD, PhD, head of the Department of Immunobiology — and a CMV researcher himself.

At his previous institution, Dr. Purdy had already discovered that CMV hoodwinks its human host into producing lipids, fatty compounds that are essential for life — but CMV was triggering the cell to manufacture specific lipids that are essential for the virus to infect its next host. With most of his peers focused on viral genes or proteins, he hoped to learn more about these lipids and what they did.

Once here, Dr. Purdy developed new techniques in mass spectrometry to identify these lipids. A mass spectrometer weighs molecules so precisely that their atomic makeup can be deduced from their mass, but traditionally this tool could only measure very small molecules. Dr. Purdy recalibrated his equipment to detect the bigger lipids associated with CMV — and when he did so, a new world opened up to him.

“We’re seeing lipids that nobody else is able to see,” he said. “I don’t think there’s any other lab doing it the way we are.”

Dr. Purdy learned that, after commandeering the human cell to make copies of itself, new viruses cloak themselves in these lipids — creating a “viral envelope” — before leaving the host cell to infect neighboring cells. Members of Dr. Purdy’s lab don’t know exactly what role these lipids play in the infection process, but they’re having fun imagining what might be going on.

“We spend a lot of time envisioning what functions these lipids have, and we’re now trying to develop the tools to test our hypotheses,” Dr. Purdy said, adding that, in general, viral envelopes serve many purposes, allowing a virus to leave host cells and infect new cells. “When we decrease the number of these lipids, that virus is not infectious anymore, so it is important for something — we just don’t know what yet.”

He hopes that, someday, his research will lead to new strategies for preventing or treating CMV infection. 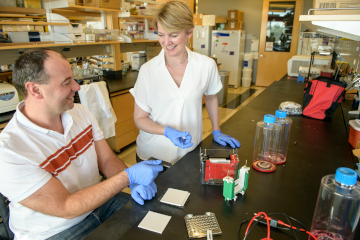 “If a drug blocked the synthesis of these lipids, it would be a dead end for that virus,” he said.

Shortly after arriving at the College of Medicine – Tucson, Dr. Purdy was paired with a mentor, Felicia Goodrum, PhD, professor and interim associate head of immunobiology, who studies how CMV lies dormant in our bodies. She was impressed by his previous work.

“He was applying novel technology to a big question that had not been looked at,” Dr. Goodrum said. “Not many people have the tools that he has, a unique skill set that makes these very complicated questions approachable. There’s a big puzzle to be cracked, and it’s a rich area of inquiry. I can’t wait to see what the next five to 10 years brings.”

For all of Dr. Purdy’s accomplishments, some might be surprised to learn he had to be poked and prodded into the niche he is now so happy to occupy.

“As a student, there were two things I hated: metabolism and herpesviruses,” he said with a laugh.

Metabolism, the chemical reactions that occur in cells as they carry out their daily activities, was the first topic that had to win him over.

“As a student, metabolism did not pique my interest because I naively thought all the questions in the field had already been answered,” he recalled. “I didn’t understand why we require students to spend so much time studying it, because everything’s in a textbook — you can just look it up. It was late in my PhD when a light bulb went off. There are a lot of questions we don’t have answers to.”

Dr. Purdy began studying herpesviruses, a family that includes CMV as well as the more famous viruses that cause cold sores, chickenpox and shingles, as a postdoc in one of the world’s top herpesvirus labs. During that time, Dr. Purdy was also working in a state-of-the-art metabolism lab providing a special environment to start his work. Although he worked with a team specializing in herpesviruses, he was wary at first because these viruses seemed too complex. 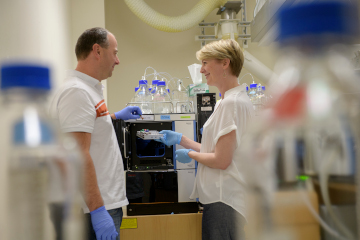 He was converted when he saw how elegantly CMV interacted with its host.

“These viruses have been with us as long as we’ve been human. That’s why this virus knows us so well, and can reprogram host metabolism to trick the host into generating these lipids,” he said. “Once I realized that CMV knows human biology better than any human knows it, I was hooked. I was like, ‘CMV, I’m going to spend the rest of my career studying you!’”

To get here, Dr. Purdy navigated a winding path to arrive at a place where only a person with his rare combination of skills could land. Learning every trick that CMV uses could change the game, not only for this virus, but for other viruses and disease processes as well.

“The mass spectrometry approaches and the lipid libraries we’re developing apply to other things, too. We can use these new lipidomics tools to learn about other viruses and pathologies that involve lipids,” he said. “This is opening doors to understanding other diseases.”