Kevin Moynahan, MD, FACP, University of Arizona College of Medicine – Tucson professor of medicine and vice dean for education, received the 2022 National Golden Apple Award for Teaching Excellence from the American Medical Student Association (AMSA). The association places great emphasis on the importance of medical education as a means of equipping medical students and future physicians with the knowledge, skills and attitudes necessary to enter the dynamic health care arena and make a substantive difference in their patients’ lives.

"The ability to make a positive difference in a learner’s medical education, and also learn from them, is a privilege that I treasure every day,” Dr. Moynahan said. “During my career at the College of Medicine – Tucson I have had 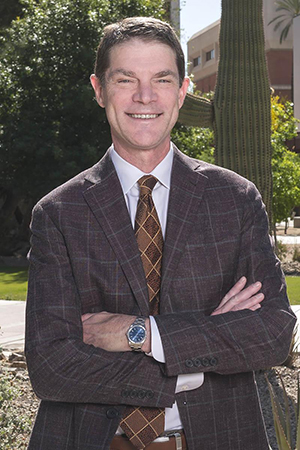 many different responsibilities and titles, but teaching has always been a large part of what I do. This recognition from the American Medical Student Association, after being nominated by one of my own students, is a singular honor that encapsulates my passion for medical education and patient care.”

AMSA is a national, student-governed organization and is the oldest and largest independent association of physicians-in-training in the U.S. The association has over 30,000 members worldwide. “We exist to prepare, train and embolden medical students to become leaders,” the AMSA website states.

Dr. Moynahan was nominated by Andres F. Diaz, UArizona College of Medicine – Tucson medical student and AMSA member. “Dr. Moynahan’s pedagogic approach is greatly influenced by the way he practices medicine and cares for patients,” Diaz wrote in the nomination letter. “At every level – from the socioeconomic to the molecular – Dr. Moynahan strives to understand a patient’s unique needs, life circumstances and pathophysiology. Through genuine history taking and masterful physical examinations, Dr. Moynahan is able to connect intellectually, emotionally and professionally with all of his diverse patients.”

Dr. Moynahan said his inspiration for medical education comes from the experiences he had as a medical student and resident. “I still remember those educators who made a positive difference in my career,” he explained. “Teaching medicine requires humility, an inquisitive nature and continuous learning given the rapid expansion of medical knowledge. That knowledge must be integrated into the art of medicine, that of actually relating to and caring for another human being – and this also needs to be taught and role-modeled.”

Dr. Moynahan first came to the College of Medicine – Tucson as a medical student in 1989. He graduated in 1993 and stayed at the college for his residency in internal medicine where he was subsequently selected as chief resident. He joined the faculty in 1997. “I feel gratitude for UArizona and the College of Medicine – Tucson both for my education and for allowing me to achieve my academic and clinical career goals here without moving to different institutions. UArizona Health Sciences and the college have been a wonderful home for me.”

First established in 1950 as the Student American Medical Association (SAMA) under the American Medical Association (AMA), SAMA announced its split from the AMA in 1968 citing philosophical differences and declaring financial independence. “The organization began to take a stand on more socio-medical issues, such as civil rights, universal health care and Vietnam,” the AMSA website notes. They officially changed their name from SAMA to AMSA in 1975.