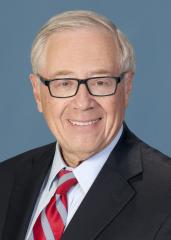 It is with a sad and heavy heart that we share the news of the passing of Ronald Weinstein, MD, professor of pathology, public health, medical imaging and pharmacy practice-science, and co-founder and long-time director of the renowned Arizona Telemedicine Program at the University of Arizona College of Medicine – Tucson. Dr. Weinstein was beloved and respected by the countless students, trainees, colleagues, staff and community partners who worked with and learned from him during his long and illustrious career.

A native of Schenectady, New York, Dr. Weinstein earned his medical degree at Tufts Medical School before completing his pathology residency at Massachusetts General Hospital.  He served in the U.S. Air Force, achieving the rank of major while working at the Aerospace Medical Research Laboratory at Wright-Patterson Air Force Base in Dayton, Ohio, before embarking on his career in academic medicine at Rush Medical College in Chicago. In 1990, he joined the UArizona College of Medicine – Tucson as professor and chair of the Department of Pathology, and went on to hold academic appointments in the UArizona Mel and Enid Zuckerman College of Public Health and R. Ken Coit College of Pharmacy.

Exceptionally inquisitive and inventive, Dr. Weinstein was dedicated to medical research and technological development, with a particular interest in telemedicine, cancer, microscopy and pathology. He is best known for being a pioneer in the field of telemedicine and telepathology, inventing and commercializing robotic telepathology systems and diagnostic networks that were deployed in multiple countries. He coined the term “telepathology” and has been referred to as the father of the sub-specialty. He is internationally renowned and served as a telemedicine advisor for ministers of health in several countries and was a frequent lecturer at international medical conferences.  Dr. Weinstein published 11 books, 57 book chapters, and more than 300 articles in peer-reviewed publications.

During his 25-year tenure as director, the Arizona Telemedicine Program linked more than 160 sites in 70 communities, bringing clinical services—in some cases life-saving—to hundreds of thousands of patients, many of whom live in Arizona’s medically underserved areas.  The Arizona Telemedicine Program also has served as a valuable training platform for thousands of health care providers in Arizona and across the Southwest.

Dr. Weinstein was a respected leader in his field who served terms as president of six professional societies, including the American Telemedicine Association, the United States and Canadian Academy of Pathology, and the International Society of Urological Pathology, among others.  He was recognized with many state, national, and international honors and awards, among them induction into the US Distance Learning Association Hall of Fame, and receipt of the Arizona Medical Association’s Distinguished Service Award, the Distinguished Service Award of the Association of Pathology Chairs, the K.F. Mostofi Distinguished Service Award of the International Society for Urologic Pathology, and the Lifetime Teaching Award from the College of Medicine – Tucson.  In 2019, he was honored by his peers, who selected him to deliver the 41st annual College of Medicine Founders Day lecture.

As he said to the Phoenix Business Journal last year, “My dream at the beginning of my career was to do something that would have an impact around the world.” We can all say with appreciation and admiration that Dr. Weinstein realized his dream, and we are all better for it.

Dr. Weinstein is survived by his wife Mary, son John Weinstein and his husband Brian Mikesell; and daughter Katherine Weinstein Miller and her husband Craig, and their sons Miles and Ollie.

A celebration of Dr. Weinstein’s life will be held from 1 – 3 p.m. on Sunday, Jan. 16, in the Health Sciences Innovation Building. The celebration of Dr. Weinstein’s life will include a program followed by a reception. The event includes in-person and virtual registration. A video link will be shared with those who wish to attend remotely. Parking will be available for free adjacent to the Health Sciences Innovation Building, which is located southwest of the medical school.

In lieu of flowers, his family asks that donations be made to the Dean’s Fund for Excellence at the College of Medicine – Tucson with the goal to create a named scholarship.